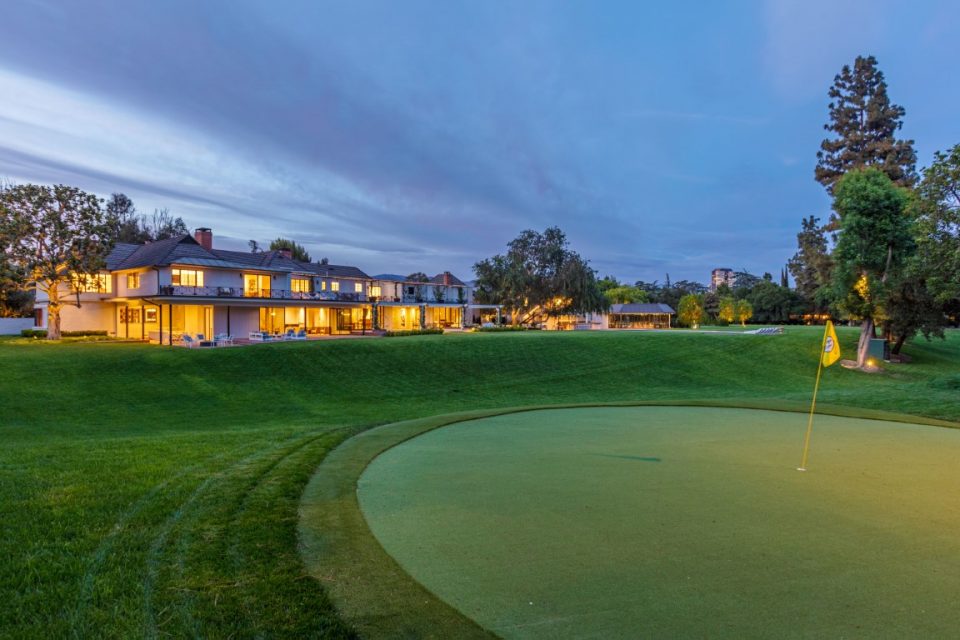 Bob Hope’s longtime home in California is for sale.

With worldwide fame and wealth, Bob Hope was able to choose any home that met his fancy. His longtime home with a mini-golf course in LA’s Toluca Lake neighborhood is for sale and featured this week at TopTenRealEstateDeals.com. Photos with media permission available at: http://bit.ly/toptenmedia.

Bob Hope was not only the penultimate entertainer, he was also a passionate golfer. He loved golf so much that in one of his famous quotes he said, “Golf is my real profession. Entertainment is just a sideline. I tell jokes to pay my greens fees.” What was Hope’s full-time home in Toluca Lake has a one-hole golf course, designed by Hope himself, with two tee positions. That home has currently hit the market at $29 million.

Born in London in 1903 with a big name, Leslie Townes Hope, he emigrated to the U.S. with his parents at age four. His distinctive appearance with the well-recognized ski-jump nose came from reconstructive surgery after his face was crushed by a falling tree while helping his brother cut trees. By age 20, he was on his career path starting in radio with his one-liners and quick, mostly self-deprecating jokes; it wasn’t long before he was on his way to Hollywood. Hope was the whole package that Hollywood demanded back in the day. Stars were expected, and were trained, to sing, dance and act by the studios. Hope arrived in Hollywood with something extra that set him apart: a rare timing ability for delivering comedy.

With increasing fame and the increasing wealth that followed, Hope was able to choose any home that met his fancy, from his UFO vacation house in Palm Springs to his permanent house with a mini-golf course in LA’s Toluca Lake neighborhood. Hope and wife, Dolores, built the house in 1939 as an English Traditional, which they made more contemporary in 1950. Nestled on a beautifully landscaped five acres of mature evergreens, rose gardens, and the one-hole golf course with sand trap and driving greens, the 14,848-square-foot home includes eight bedrooms, eight baths, indoor pool and spa, billiard room, bar and chef’s kitchen. There is also a guest house, staff quarters, staff offices and large outdoor pool. The private primary suite wing has two bedrooms, his-and-her baths and dressing rooms and a shared study. There is a home theater and a gym with a steam and infrared sauna, a four-car garage, motor court, extensive security system, security office, and three electric gate entrances. An ancillary structure contains a tennis pavilion, commercial kitchen, security office, conference room and a walk-in fireproof safe. Over the years the home has played host to presidents and a large number of celebrities.

Bob Hope died in 2003. His longtime home in Toluca Lake is for sale at $29 million. Kevin Dees of The Agency in Beverly Hills holds the listing.