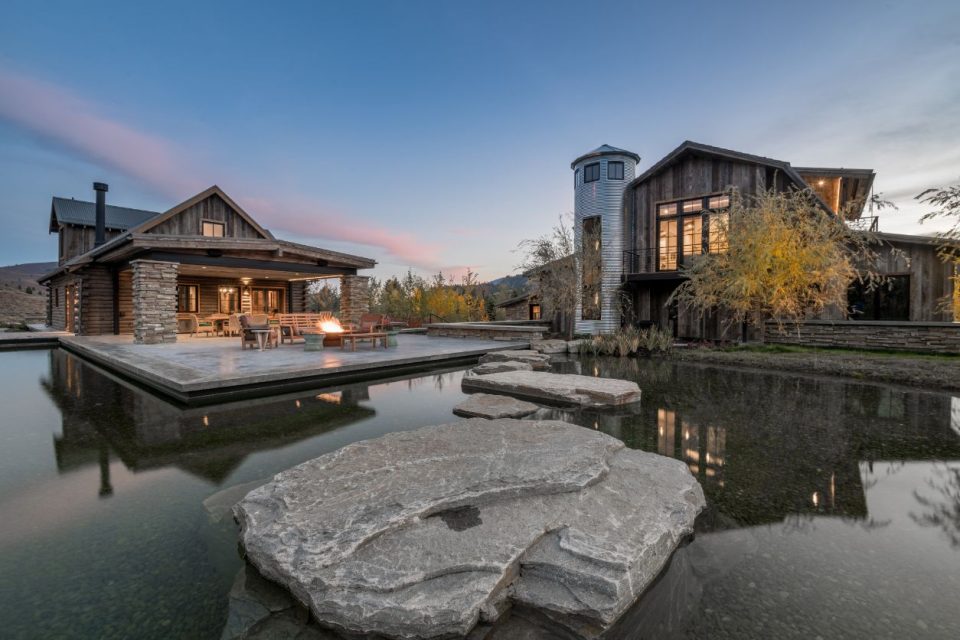 Parts of the movie ‘Bus Stop’ with Marilyn Monroe were filmed here in 1956.

In 1956, Marilyn Monroe got her first chance to step outside her dumb blonde stereotype with a dramatic role in ‘Bus Stop.’ The Sun Valley, Idaho compound where ‘Bus Stop’ was filmed is for sale and featured this week at TopTenRealEstateDeals.com. Photos with agent permission available for media use at Marilyn Monroe Movie Home or at: http://bit.ly/toptenmedia. Permission for use is only granted if the media outlet credits TopTenRealEstateDeals.com with a direct link to our article or a source mention in print media.

Blonde Bombshell Marilyn Monroe was one of Hollywood’s greatest sex symbols, still a beauty icon decades after her 1962 suicide. Her career as a top-billed star lasted just ten years, but her films grossed over $200 million (equivalent to $2 billion today) and she took home the Golden Globe for Best Actress for her performance in ‘Some Like it Hot.’ She was known for playing “dumb blondes” for comedic effect, but the woman behind the character was a far more nuanced individual. In 1956’s ‘Bus Stop,’ directed by Pulitzer Prize-winner Joshua Logan, Monroe got her first chance to step outside the stereotype with a dramatic role. She studied at The Actor’s Studio to prepare for the film, which became both a critical and commercial success.

A sprawling Idaho estate that served as one of the main film locations for ‘Bus Stop’ has been listed for sale at $15.99 million. Located in Sun Valley, Idaho, the twelve-acre property includes the main house, a guest house, and a barn set up for entertaining. It is the guesthouse that once played host to Marilyn Monroe, portrayed as “Grace’s Diner” as well as the location for several other films. The 2000-square-foot guesthouse features two beds, two-and-a-half baths, and lots of old Hollywood history. The nearby “party barn” is a 3000-square-foot event space that features a magnificent dormitory, a fully fitted kitchen, a living area, one-and-a-half baths, a terrace, a conservatory, and several heated garages.

The main house is a beautifully designed 6000-square-foot modern craftsman with five bedrooms, five and a half bathrooms, a study, and a spacious open floor plan that connects the living and dining areas. The home’s two levels and prominent windows showcase the spectacular mountain views. The home features warm mahogany wood accents and multiple stone fireplaces, a three-car garage, an outdoor hot tub, a huge fire pit, and several terraces with water features. Breathtaking views of Bald Mountain, as well as the Smokey and Boulder Mountains, are visible from all three of the estate’s units. An artificial lake completes the property’s serene look and feel. Private and secluded, the estate is located far from the hustle and bustle of the city but close to the famous ski slopes of Sun Valley.

Sun Valley was developed in the 1930s by W. Averell Harriman, chairman of the Union Pacific Railroad, as America’s first ski resort, in order to attract more passengers for his train cars. Best known for its alpine ski area at Bald Mountain, the challenging slopes, substantial vertical drop, and lack of wind make “Baldy” one of the world’s best ski mountains, while nearby Dollar Mountain provides gentler slopes for novices and was the site of the world’s first chair lift.

The region has been a seasonal haven for celebrities since the days of Hollywood’s Golden Age when Harriman used the celebrities to bring publicity to the new ski town. Visitors included Ernest Hemmingway (who wrote ‘For Whom the Bells Tolls’ while staying at the Sun Valley Lodge), Gary Cooper, Clark Gable and Errol Flynn. It continues to draw notables to this day, with Arnold Schwarzenegger, Bruce Willis, Ashton Kutcher, Clint Eastwood, Demi Moore, and Tom Hanks owning vacation homes in the area.

The listing is held by Engel & Völkers Sun Valley in Ketchum, Idaho.