Digital designer Anthony Authié of Zyva Studio and visualisation artist Charlotte Taylor and have collaborated on an NFT auction of Architoys, a range of capsules containing fantasy architecture projects.

The aluminium capsules, which are the same size as an AirPods case, contain a watch-like mechanism that can display a series of digital images of virtual architectural environments.

They can also store digital images and data files relating to a fantasy project.

"We wanted to give people the opportunity to collect a one-of-a-kind architectural concept," said Authié.

"The idea was to create a small and precious object that can be exchanged from hand to hand, like Pokémon cards in the playground."

The collectable capsules contain visuals and files of virtual projects the duo have produced over the last few years including Villa Ortizet and Neo-Chemosphere, two fictional dwellings the duo worked on together.

The former is a house set in the French countryside inspired by Authié's grandfather while the latter is a spaceship-style clifftop dwelling designed in homage to Californian architect John Lautner.

Authié will also sell three virtual designs created by Zyva Studio at the auction, which starts today at Foundation.app.

Based in Marseille, Authié describes Zyva Studio as "a ludicrous architecture studio". It produces conceptual buildings and products. 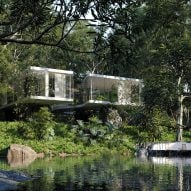 London-based Charlotte Taylor is a visualisation artist and founder of creative studio Maison du Sable. Her projects include Casa Atibaia, an imaginary house set in a Brazilian jungle co-designed with Nicholas Préaud.

Taylor and Authié are leading lights in a new generation of architects and designers whose work primarily exists in a digital space.

The recent emergence of cryptocurrencies and NFTs (non-fungible tokens) has created a booming market for this type of virtual work.

Authié told Dezeen that digital technology "has created a form of architectural liberation".

"Digital has allowed the development of new forms of architecture and allowed us to push the boundaries of the profession without the constraints of gravity, finance and administration," he said.

"We can therefore give free rein to our imagination, thinking and creating the wildest dreams that take shape in our heads."

NFTs offer a potential business model for designers that work in the virtual world, Authié believes. "NFTs are an incredible way of showcasing work and finding new investors," he said.

"From a business perspective, creating virtual projects allows them to create references that can be presented to their customers. This extra credibility helps them obtain a real order."


"It also allows architects and designers to develop concepts that push the boundaries of their profession."

But last week, architect Chris Precht abandoned plans to sell NFT artworks due to the "horrible" carbon emissions associated with the mining of cryptocurrencies.

"This leaves such an ecological guilt for me that this time, I have to say no to that," Precht said.

Authié described the topic as "very complex and technical" but added: "It seems obvious to me that it is today necessary to find mixed solutions which allow the use of these new technologies while reducing their carbon footprint."

"I think we are at the cusp of a fundamental paradigm shift," he added. "The virtual world is increasingly taking over the real world, and we are only at the beginning."

Taylor will present her work at Dezeen Club's metaverse meet-up on 7 April. The event will explore the rise of the metaverse as a digital alternative to the real world.