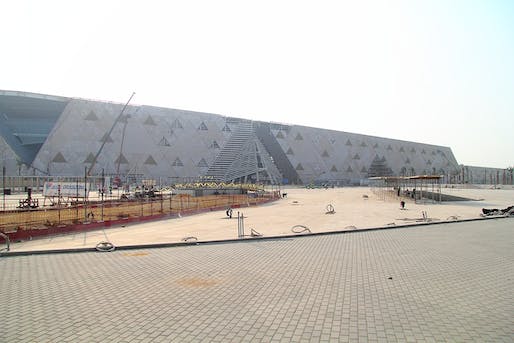 A $1 billion museum complex situated on the Giza plain overlooking the Great Pyramids is nearing completion in Egypt after a nearly decade-long delay.

The massive structure, initially planned by Irish firm Heneghan Peng Architects, is being completed now, The Art Newspaper reports, under the direction of Major General Atef Moftah, an official appointed in 2016 by Egyptian President Abdel Fattah Al-Sisi to finish the project. Moftah, who is a trained engineer, has taken over executing the design of the complex and has adapted the initial proposal to speed up construction and lower costs, the report states.

The Art Newspaper explains that the structure is "96.5% complete" and will make its global debut sometime in 2021.

The massive museum complex will contain over 5,000 artifacts discovered in the tomb of Tutankhamen as well as a large collection of ancient statuary and other relics. A centerpiece of the museum will be a 11 meter-high, 83-ton red granite statue of Ramses the Great, according to the report, which was delivered to the building site in 2018 so that the museum's gargantuan, sky-lit lobby could be built around it.

These Sleek Houses Are 3D Printed, and They Fit in Your Backyard
16 de agosto, 2020